LONG-LASTING SUPPORT IN THE INTERNATIONAL ARENA 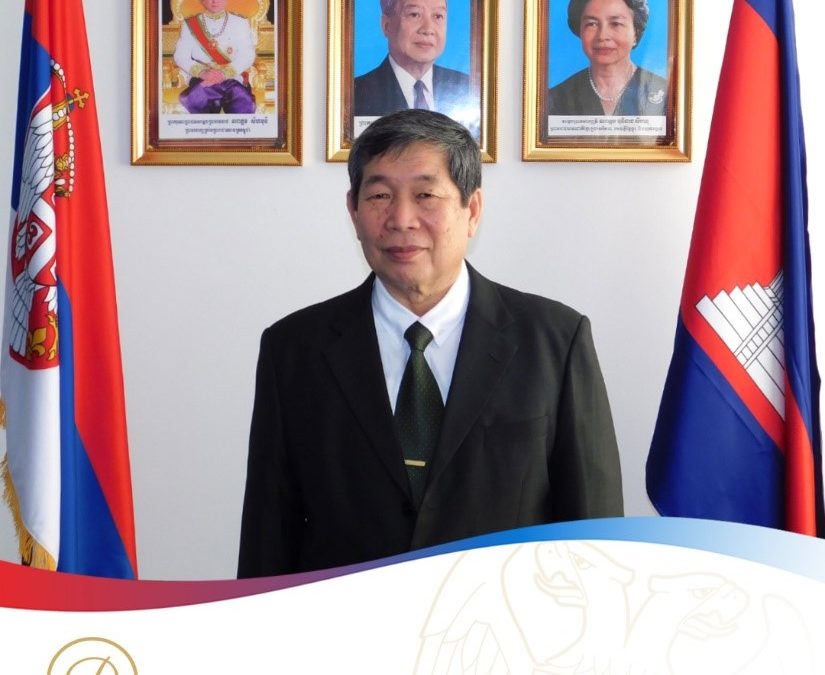 LONG-LASTING SUPPORT IN THE INTERNATIONAL ARENA

REPUBLIC OF SERBIA AND THE KINGDOM OF CAMBODIA

H. E. Tan Vutha, Ambassador of the Kingdom of Cambodia to Serbia, is one of the diplomats who recently came to Belgrade to unlock the potential fields of cooperation between the two countries. The partnership established so far and the planned activities indicate that the geographical distance does not affect the perspectives of political dialogue.

H.E. Tan Vutha, Ambassador of the Kingdom of Cambodia to Serbia

Which historical influences have shaped the life of today’s Cambodia?

Cambodia is a Southeast Asian nation whose landscape spans low-lying plains, the Mekong Delta, mountains, and Gulf of Thailand coastline. Phnom Penh, its capital, is home to the art deco Central Market, glittering Royal Palace and the National Museum’s historical and archaeological exhibits.  After 80 years of colonial hibernation, the brief episode of Japanese occupation during World War II, that coincided with the investiture of king Sihanouk was the opening act for the irreversible process towards re-emancipation and modern Cambodian history. The Kingdom of Cambodia (1953–70), independent since 1953, struggled to remain neutral in a world shaped by polarisation of the nuclear powers USA and Soviet Union. As the Indochinese war escalates, Cambodia becomes increasingly involved, the Khmer Republic is one of the results in 1970, another is civil war. 1975, abandoned and in the hands of the Khmer Rouge, Cambodia endures its darkest hour – Democratic Kampuchea and its long aftermath of Vietnamese occupation, the People’s Republic of Kampuchea and the UN Mandate towards Modern Cambodia since 1993.

Angkor Wat is considered the largest religious building in the world. It is also in your flag. Could you tell us more about this spectacular monument?

Angkor Wat is a temple complex in Cambodia and the largest religious monument in the world by land area, on a site measuring 162.6 hectares (1.626 km2; 402 acres). Originally constructed as a Hindu temple dedicated to the god Vishnu for the Khmer Empire, it was gradually transformed into a Buddhist temple towards the end of the 12th century, and as such it is also described as a “Hindu-Buddhist” temple. It was built by the Khmer King Suryavarman II in the early 12th century in Yaśodharapura, the capital of the Khmer Empire, as his state temple and eventual mausoleum. Breaking from the Shaiva tradition of previous kings, Angkor Wat was instead dedicated to Vishnu. As the best-preserved temple at the site, it is the only one to have remained a significant religious centre since its foundation. The temple is at the top of the high classical style of Khmer architecture. It has become a symbol of Cambodia, appearing on its national flag, and it is the country’s prime attraction for visitors. Angkor Wat combines two basic plans of Khmer temple architecture: the temple-mountain and the later galleried temple. It is designed to represent Mount Meru, home of the devas in Hindu mythology: within a moat more than 5 kilometres long and an outer wall 3.6 kilometres long are three rectangular galleries, each raised above the next. At the centre of the temple stands a quincunx of towers. Unlike most Angkorian temples, Angkor Wat is oriented to the west; scholars are divided as to the significance of this. The temple is admired for the grandeur and harmony of the architecture, its extensive bas-reliefs, and for the numerous devatas adorning its walls.

How would you describe your country to the Serbian People?

Cambodia is located in Southeast Asia, on the Indochinese peninsula. It is bordered in the north-west by Thailand, in the southeast by Vietnam and in the north by Laos. The coastline of about 450 km in the south borders the gulf of Thailand. Cambodia is the “Kingdom of wonder”, we have lots of things to see and visit, we have cultural heritages, monuments such as Angkor Wat, Angkor Thom, Bayon, Banteay Srey temples and other ancient monuments located in all various provinces of Cambodia,  scenic places like beautiful beaches in Sihanouk, Kampot and Kep and Koh Kong provinces, you can see sun rise and sun set on Bakheng mountain, Siem Reap province, water fall in Mundulkiri and Ratanakiri provinces… I hope you would love and like it. I have been here for a short period of time, I met a lot of people, Cambodia is known by most of Serbians and now they are happy that Cambodian representatives are here in Belgrade.

What were the reason behind the decision to open your embassy in Serbia after 30 years?

Despite the geographical distance and test of time, Cambodia attaches its importance to the traditional ties with Serbia based on shared interests, equality, mutual respect and historical friendship, which was nurtured by the late King Norodom Sihanouk of Cambodia and the late President Josip Broz Tito of the Socialist Federal Republic of Yugoslavia.  The Royal Government of Cambodia sincerely thanks the Serbian government for support and intervention in securing Cambodia’s diplomatic property in Belgrade. The re-opening of the Royal Embassy of Cambodia in Belgrade will lend a new impetus for advancing practical cooperation in all spheres of common benefit of our two peoples. Nowadays, both sides are working closely on the fields of tourism, investment, cooperation between our two diplomatic academies as well.

How do you see the political, diplomatic and economic relation between our two countries? How do you assess the current cooperation between Serbia and Cambodia?

Cambodia cherishes its long-standing friendship and good cooperation with the Republic of Serbia over the years based on shared interests, mutual respect and non-interference. We note with satisfaction the outcomes of the last three rounds of political bilateral consultation between the Ministry of Foreign Affairs and International Cooperation of the Kingdom of Cambodia and the Ministry of Foreign Affairs of the Republic of Serbia in 2017, 2018 and 2019 which had identified the courses of new concrete steps to foster across-the-board partnership between the two counties and we expect to have the 4th meeting in Phnom Penh, Kingdom of Cambodia, next year. 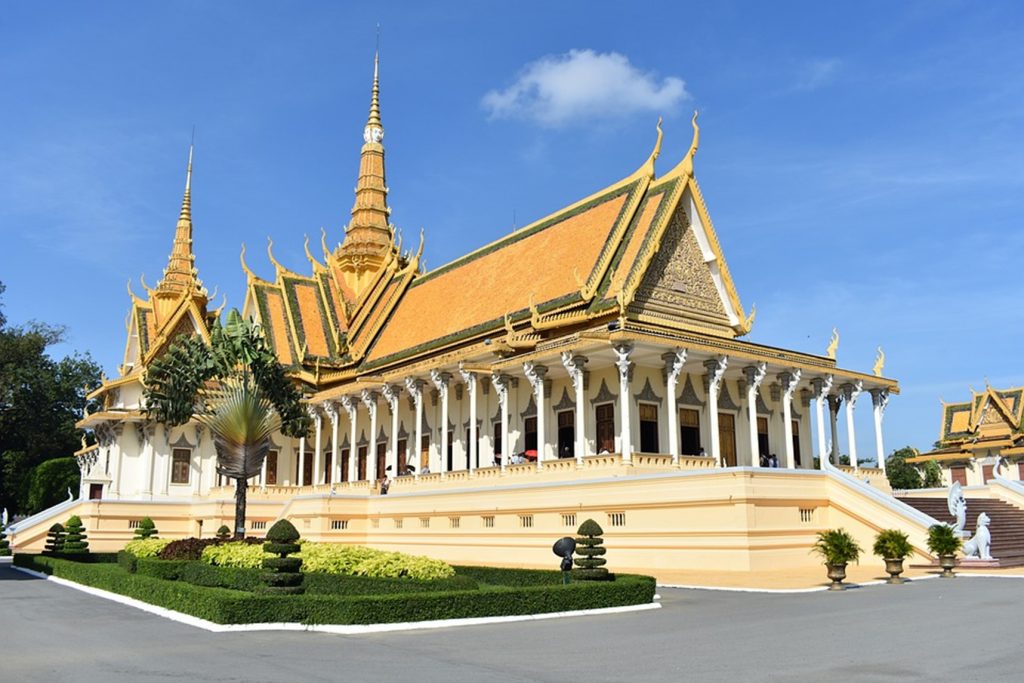 Phnom Penh is a political, economic and cultural hub of your country and Belgrade plays the same role for Serbia. Could you compare the cities?

Phnom Penh, Cambodia’s busy capital, sits at the junction of the Mekong and Tonlé Sap rivers. It was a hub for both the Khmer Empire and French colonialists. On its walkable riverfront, lined with parks, restaurants and bars, are the ornate Royal Palace, Silver Pagoda and the National Museum, displaying artifacts from around the country. At the city’s heart is the massive, art deco Central Market. Phnom Penh is a political, economic and cultural hub of our country, we can see Belgrade is the same.

How does your embassy plan to promote Cambodia in Belgrade, under and after corona crisis?

As you know, besides the renovation work of the Embassy’s premise located in 67 Gospodar Jovanova Street, we have set up our temporary office using as the Royal Embassy of Cambodia in Belgrade, meanwhile we open our consular section to issue visas for tourists, who wishes to go to visit Cambodia. We still have a lot of things to do to follow up other pending issues in order to boost the cooperation between our two countries, to unlock some potential fields of cooperation.

The Ambassador concluded by stating that the Kingdom of Cambodia and the Republic of Serbia always support each other on the international arena and that both countries have struggled to protect their national sovereignty, territorial integrity, peace and stability in their own countries and in the whole region.

Since its opening, the Embassy of the Kingdom of Cambodia to Serbia has been hosted in the property managed by Dipos. In addition to rental, it also uses the cleaning services offered within our portfolio. We are pleased to note that, according to H. E. Tan Vutha, Ambassador, the Embassy appreciates the services extended so far.