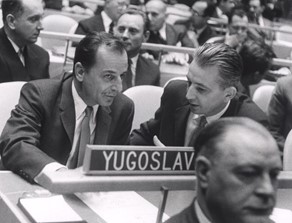 Konstantin-Koca Popovic was an important diplomat and state official in socialist Yugoslavia. He was a Sorbonne student, writer and one of the founders of Belgrade Surrealist Group. He participated in the Spanish Civil War and the National Liberation War. He  was fighting all his life against fascism, Bolshevism, nationalism and all other forms of one-mindedness. Inspired by the tradition of the Enlightenment and the French Revolution, he was also one of the most ardent advocates of true non-alignment and democracy. 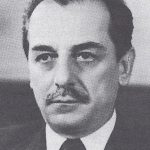 On March 14, 1908, a respectable and wealthy Belgrade family Popovic, one of the richest in Serbia, was celebrating the birth of a boy. Imagining his education at the most prestigious foreign universities and him inheriting the family business, no one even could think at that moment that the child would become a Minister of Foreign Affairs of Yugoslavia, remembered for his twelve-year mandate at this position.

Koca started his education in French at a Swiss Catholic convent and completed the Second Men’s Gymnasium in Belgrade. He graduated in philosophy at the Sorbonne. Right there, in Paris, Koca stepped into the revolutionary circles of Parisian artists, joining the surrealist movement. He became one of the most important theorists of Serbian surrealism and a close friend of André Breton and Jean Cocteau. He also graduated from the School of Reserve Artillery Officers of the Army of the Kingdom of Yugoslavia in Sarajevo in 1927, and in the same year he received the rank of reserve artillery lieutenant. He joined the CPY in 1933 and participated in the Spanish Civil War as a communist.

He joined the Partisans immediately after the outbreak of the uprising in June 1941. Popović gained enormous trust from the General Staff by securing their retreat from the Republic of Uzice to Sandzak in the summer of 1941. In just six months, Koca became the commander of the famous First Proletarian Brigade, which underwent the Igman March, covered more than 20,000 kilometers, and in whose battles more than 22,000 people from all over Yugoslavia took part. He became a legend due to his heroic warfare. 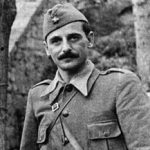 The “era of Koca Popovic” occupies a special place in the history of the foreign policy of the former Yugoslavia. He took office as Minister of Foreign Affairs, crowned with the glory of war, in 1953. During his twelve-year mandate, dramatic changes took place in the history of the post-war world and in the foreign policy relations of Yugoslavia. As a person, he differed in many ways from his predecessors and followers.

The peculiarity of his political biography was the fact that Koca, unlike most, was never a member of the Politburo, so his appointment as Minister of Foreign Affairs came as a big surprise to the public. However, Josip Broz Tito recognized him as a man who could talk on an equal footing with all the actors with whom Yugoslavia met on the international scene, especially with the West.

According to certain sources, the credit for building the Balkan Pact could be attributed to Koca Popovic. During his tenure, the Agreement of Friendship and Cooperation was signed between Yugoslavia, Greece and Turkey in 1954, bringing Yugoslavia into contact with two NATO members. Had it not been for the normalization of relations between Yugoslavia and the USSR and the emergence of other political factors, Balkan cooperation could have become the starting groud of Yugoslavia’s foreign policy in the future.

The activities of Koca Popovic, as a soldier and as a diplomat, also secured US military assistance, which was of great importance for Yugoslavia at that time. Although reconciliation between the USSR and Yugoslavia soon followed, this military cooperation continued for a long time afterwards.

Koca Popovic was one of the creators of the Memorandum of London of 1954, which defined the hitherto problematic bordering of Yugoslavia and Italy and opened the way for political and economic cooperation with this country.

In his time, Yugoslavia also clearly defined its standpoint in diplomatic activities and strengthened its position of the founder of the Non-Aligned Movement. “I advocated that the term “non-alignment” should be accepted in our official documents, instead of the relatively passive terms such as “out-of-block policy” or “non-alignment” and “non-engagement”, which were not adequate for me at the time. I thought that the term “non-alignment” expresses exactly what we want to achieve, that is, the essence of that policy, because it determines equal disapproval of subordination to anyone, West or East“, he said once.  Koca Popovic was of the opinion that it was better for Yugoslavia to be a member of this Movement, than a signatory of the Warsaw Pact, military organization of Central and Eastern European countries.

In his life, he received more than 30 foreign decorations. As Secretary of Foreign Affairs, he participated in all of Yugoslavia’s negotiations with many countries around the world. As head of diplomacy and head of the UN delegation, he was one of the most deserving figures for Yugoslavia’s reputation in the world, always advocating the principles of active and peaceful coexistence. 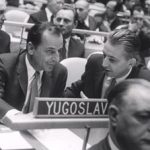 Koca Popovic as the head of the Yugoslav delegation at the session of the United Nations General Assembly (Source: Wikipedia)

Koca Popovic finally withdrew from politics and separated with Tito in 1972. He was not invited to Tjentiste, where the thirtieth anniversary of the battle of Sutjeska was marked the following year. It is said that he came there with his spachek and spent time in a tent with his soldiers.

Disintegration of Yugoslavia, for the liberation of which he fought, found him in Belgrade in his old age. In several public appearances he sharply opposed nationalism in both Serbia and Croatia. “National parties are not my choice. I don’t think that, unfortunately, they will not stay in power, but I know for sure that I will not build my ideology on a Serbian national shoe or hat ,” he said.

He died in Belgrade on October 20, 1992. His war friend William Deakin, a British historian and Churchill’s adviser who spent the war days in Montenegro and Bosnia and Herzegovina with Koca, wrote in the English “Independent” that his death “passed without too much attention from the local public, which is a sad indicator of the madness which has gripped his country”.

On the occasion of the 70th anniversary of the liberation of Belgrade, by the decision of the Assembly of the City of Belgrade, the former Zagrebacka Street in the municipality of Savski venac from September 18, 2014 was named after Koca Popovic.