WE ARE SOCIETIES WHICH SHARE MANY COMMON VALUES AND ETHICAL PRINCIPLES 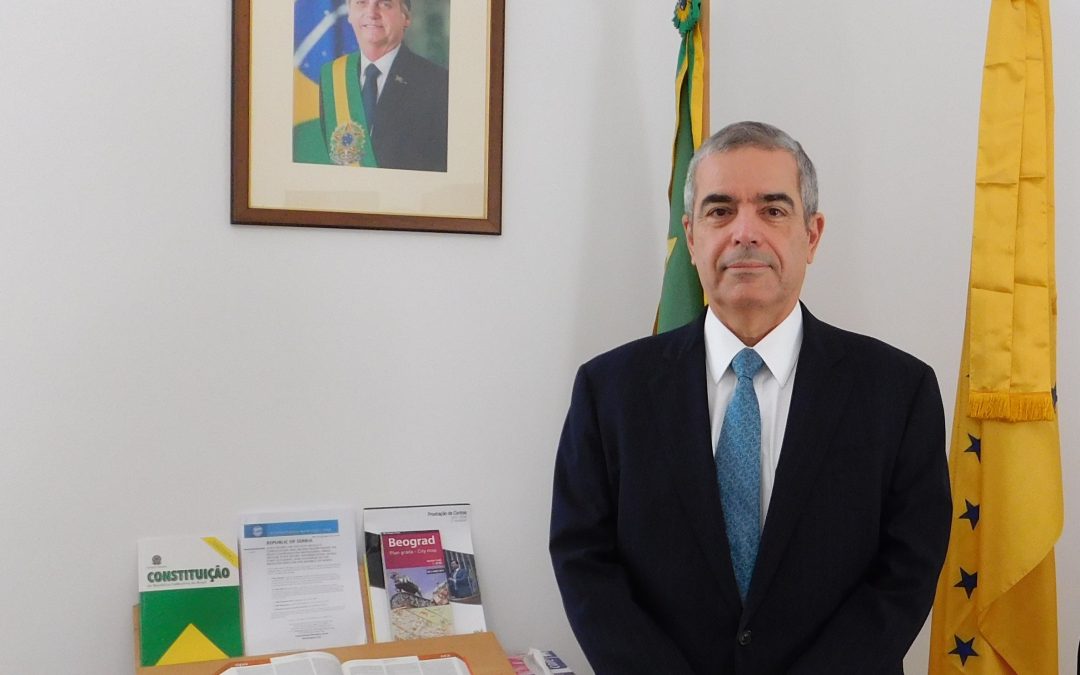 WE ARE SOCIETIES WHICH SHARE MANY COMMON VALUES AND ETHICAL PRINCIPLES

In the pleasant atmosphere of the Brazilian Embassy, whose building and offices in the very heart of Belgrade in Krunska Street are managed by Dipos, our representatives were hosted by H.E. Eduardo Botelho Barbosa. Pleased to be coming back to the premises after the out of office work influenced by the COVID-19, the Ambassador shared his views and attitudes on the development of relations between the two countries and the long-standing cooperation with our company. 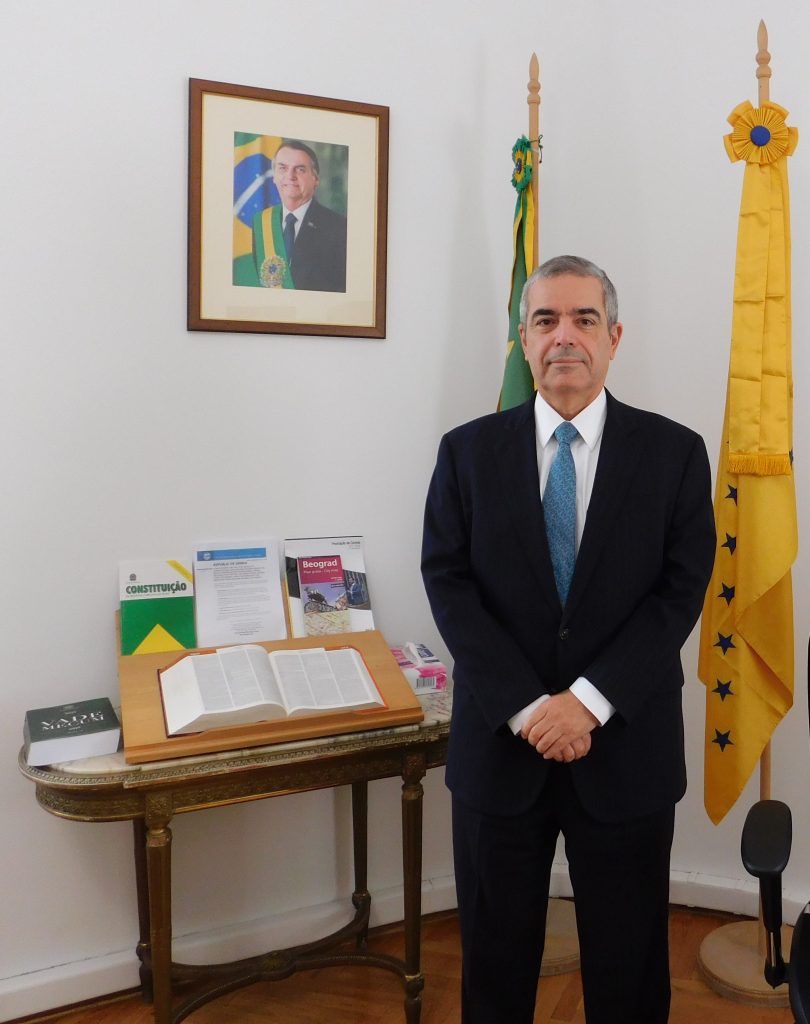 –  The history of bilateral partnership between Serbia and Brazil is long and constructive. Last year we celebrated eighty years of diplomatic relations in terms of the official establishment of the embassies. Even during the war, when your royal family went to London, we sent a diplomat to serve as liaison with the rulers of The Kingdom of Yugoslavia. The connections were re-established when Yugoslavia moved to socialist times, the Ambassador reminded at the very beginning.

– We are societies which share many common values and ethical principles, which reflect on our numerous common views on global developments and define our positions in international relations. Therefore, it is very easy for me to maintain dialogue with the Serbian government and the Serbs in general, he added.

H.E. Ambassador Barbosa emphasized that the trade relations between the eighth-largest economy in the world and Serbia are modest, but that there is complementarity. He also stated that the cooperation became more concrete eight years ago, with trade picking up, to be followed by the first Brazilian investment in Serbia.

– Two years ago, the first investment from Brazil was made in Serbia, when EMS, one of our leading pharmaceutical companies, purchased Galenika. When it was privatised, Galenika had fallen to the fourth position in the local market.  After one and a half years it recovered to be ranked second, and EMS plans to invest more. Further to this, EMS is bringing new products to Galenika and the local company is delivering its products to Brazil, so it is a win-win situation.

As Brazilian market is highly competitive in agriculture, Serbia exports mostly manufactured products, the top item including motorcycle tyres. The value of export amounts to approximately EUR 30-40 million. Reversely, agricultural products worth EUR 80-90 million, with coffee taking the largest share and with manufactured products on the rise, are imported.

– Brazil is the third largest aircraft manufacturer in the world. We supply Montenegro Airlines with our products, and we are trying to raise interest with Serbia to look into Brazilian products, the Ambassador stated.

– It is up to the governments to push the relationship. Brazil and Serbia are at different parts of the world. European market and CEFTA absorb Serbian production, whereas South America and the USA do the same with Brazilian. However, our businessmen need to be aware of the potential of the Serbian market and come here. We are working on this issue.

– On one hand, thanks to the successful marketing undertaken by Croatia, Brazilians arriving to the Adriatic coast are also exploring the inland, and increasingly Serbia. I have travelled nearly all around the Balkans with my wife. It is a spectacular mosaic of cultures and histories which Brazil has not discovered yet. Serbia should be emphasizing its beautiful natural landscapes, he recommended.

Regarding the number of Serbian travellers to Brazil, Mr. Barbosa hopes that the connection between the two countries will improve in the future, as the long journey is seen as one of the current impediments.

Excluding 2020 due to the pandemic and the policy of assigning government resources to assist 70 million Brazilians to get through COVID-19 crisis, the Embassy has been very actively promoting Brazilian culture by sponsoring diverse events at the local scene. Belgrade audience enjoyed the performances of the famous brothers Sérgio and Odair Assad at Guitar Art Festival and of the fabulous Brazilian dancers at Belgrade Dance Festival. Brazilian films awarded worldwide were presented to the audience of the LGBT Merlinka festival. The Embassy also financed the publication of a CD with 12 etudes for the guitar of Heitor Villa Lobos, Brazilian visionary composer, conductor and music professor, transcribed for the piano and played by the local pianist Julija Bal. The Embassy also supported Jazz Festival, Novi Sad Carnival, and film festivals.

Capoeira is a Brazilian form of martial art combining the elements of dance, acrobatics, and music.  Therefore, the Embassy also sponsors the work of the popular Capoeira Centre in Belgrade, run by the very dedicated Mestre Pulmao.

Cultural Department of the Embassy also organises language courses of Portuguese. Due to the pandemic, the classes are held online.

– We are happy to have established such a presence. I would like to note that this achievement is also made possible due to the openness of the Serbian scene to other cultures.  When the situation returns to normal, we will continue our activities in this regard, Mr. Barbosa shared his optimistic attitude.

He also added that the Embassy is investing efforts in improving scientific and technical cooperation, and that he would like to offer Belgrade more of Brazilian visual art and introduce local audience to the works of famous contemporary black-and-white photographer Sebastião Ribeiro Salgado. 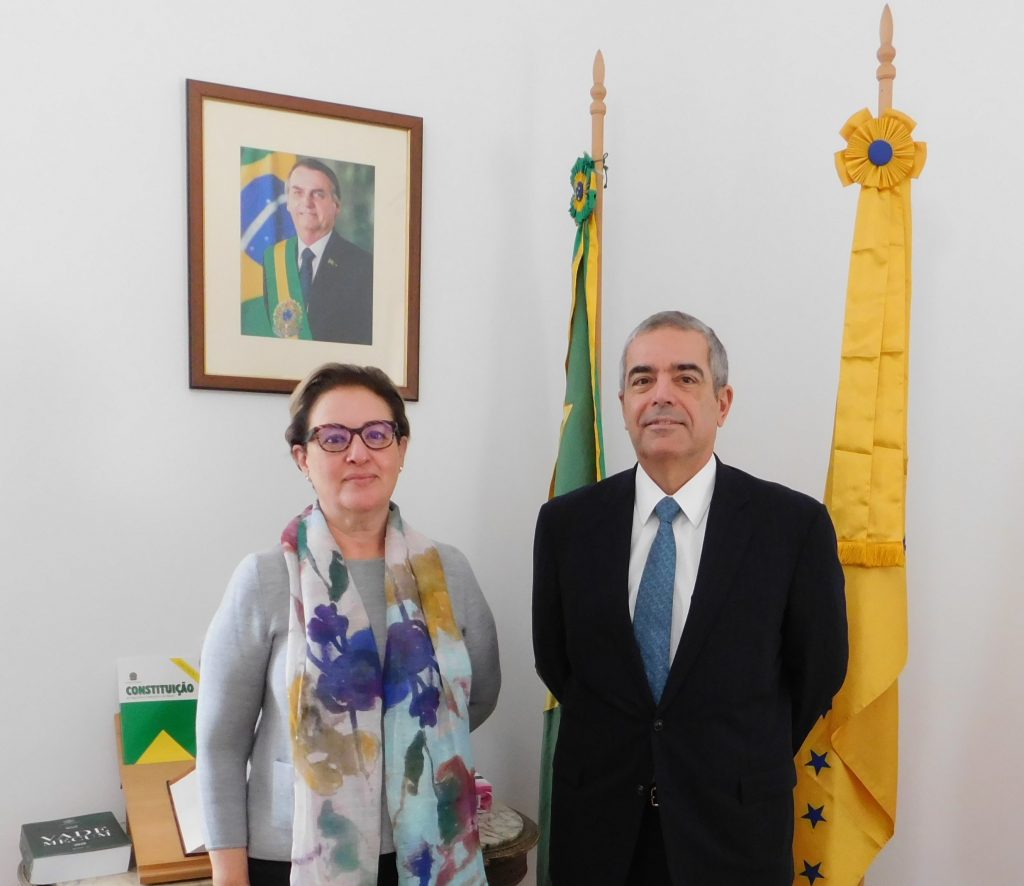 Similarities between the Brazilians and the Serbs

After a year and a half spent in Serbia, Mr. Barbosa notes that there are a lot of similarities between the two nations:

– We have the same Christian roots. We both enjoy life. Brazilians have the sense of joy and humour which helps us carry on. Both cultures value families, although modern life is changing family profiles. We value personal relations and friendships. We both like the countryside. I can say that it is in our blood, as three generations ago everything depended on agriculture.

About Serbia and Belgrade

Impressed by the natural landscapes of our country, H.E. Ambassador Barbosa has travelled throughout Serbia to enjoy what the places like Lake Palic, Sombor or towns in the south have to offer.

– I personally love Vojvodina. Its vast fields remind me of Brazil, he noted.

His Excellency also described Belgrade as a modern, metropolitan city which had exceeded his expectations, as it offers cultural entertainment, delicious food and safety.

We were pleased indeed to hear words of praise regarding the cooperation of the Embassy with our company:

– I have only good things to say about Dipos. The embassy is a landmark, but also a very comfortable office space. You are a very good landlord. The façade and the interior were refurbished recently. The building is in excellent shape. I think that Dipos takes good care. You are very open whenever we have a problem. You listen to us and you meet our needs.  We are happy to be here.

According to Mr. Barbosa, the location of his residence in downtown Belgrade is an additional asset for enjoying Belgrade:

– I feel very fortunate that the residence of Brazil is in the centre of the town, in Hilandarska Street. At weekends, I just open the doors and I can walk to have a coffee or go to a restaurant. I enjoy that kind of freedom, the Ambassador concluded.