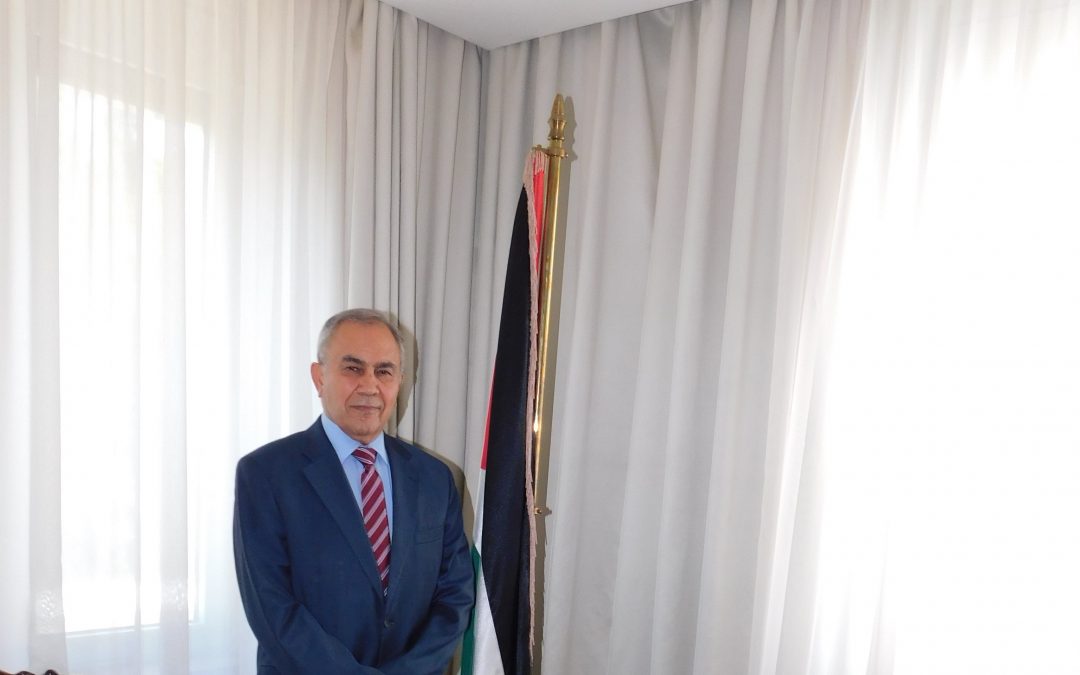 REPUBLIC OF SERBIA AND STATE OF PALESTINE

H.E. Mohammed Nabhan, Ambassador of the State of Palestine in Belgrade

Diplomatic relations between the Socialist Federal Republic of Yugoslavia and the State of Palestine were established immediately after the declaration of independence of this state, in 1989, and have been developing intensively for more than 30 years. H.E. Mohammed Nabhan, Ambassador of the State of Palestine in Belgrade, known in wider diplomatic circles for his charisma, cordiality, and sincerity, is largely responsible for their progress. He hosted representatives of Dipos in the building of the Palestinian embassy in Belgrade. While we were drinking coffee with cardamom, he shared with us his impressions of his life in Belgrade and announced significant steps in the further development of bilateral relations between the two countries. 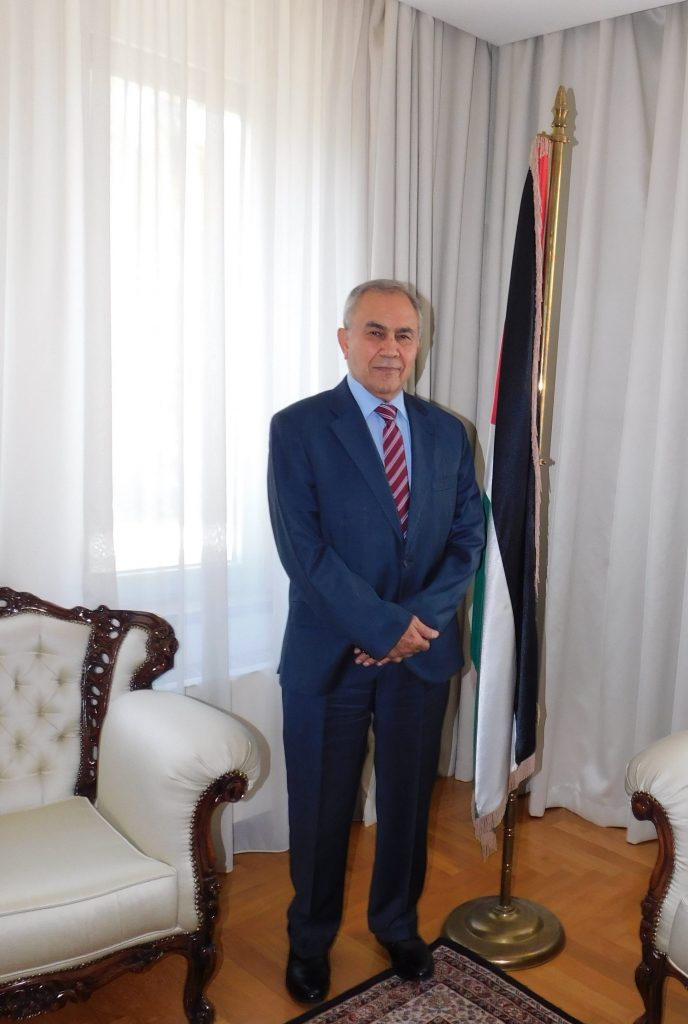 H. E. Mohammed Nabhan, Ambassador of the State of Palestine in the Republic of Serbia

You have been in Serbia since 2006. In what atmosphere did you start your diplomatic mission?

It was not difficult for me when I started working in Belgrade because I was met with the openness of people who talked to me without prejudices. This attitude encouraged me to start developing relationships in different areas.

Over time, I realized that our two nations have a lot in common, even though they live on different continents. We are separated by a large geographical area, but I discovered that the way Serbs and Palestinians think is similar. While learning and reading the history of the Serbian people, I realized that we went through similar temptations. Both nations have undergone extermination and attack and targets of others at some stage in history. Both are small in number, but they are very active and individually very successful. Both were deprived of a piece of land, they were expelled, turned into refugees, and lived under someone else’s reign. These historical moments create a similar way of looking at the world and the environment. That is why the Palestinians and the Serbs are similar – they think the same way and it is not difficult to establish contact.

What was the impression of the people in Serbia about Palestine?

In Serbia, people had the wrong impression of the Palestinians. I would like to emphasize that until the arrival of the Turks, Palestine was a completely Christian country. When the Muslims conquered it, Christianity remained dominant. Caliph Omar received the keys to the city of Jerusalem peacefully, there was no war. There is a written contract according to which no one could even touch any of the Christian churches. That is why we have the oldest churches and monasteries in the world. Today, a third of Palestinians are Christians, and 90% of them are Orthodox.

Saint Sava spent three years in Palestine on two occasions and was treated there like a prince, as a spiritual leader. The oldest monastery in Palestine is named after him – the Monastery of The Holy Lavra of St. Savas, or Mar Saba, which in our language means Saint Sava. During the reign of Nemanjici, Serbia had a lot of churches and lodgings in Palestine. Unfortunately, after it was conquered by the Turks, it failed to regain those possessions, which were taken over by the Russians or the Greeks. 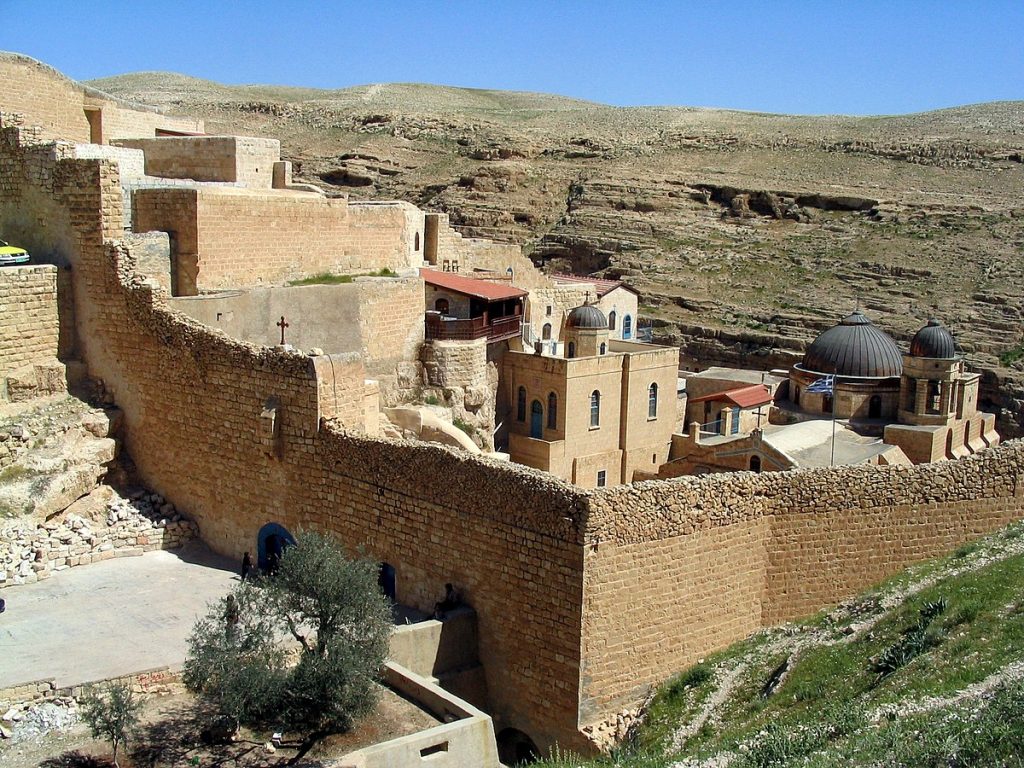 Monastery of The Holy Lavra of St. Savas

What diplomatic activity has been established in the previous period?

During these 15 years, three presidential visits were organised. The President of Palestine, Mahmoud Abbas, came to Belgrade twice, last time in 2015 when we opened the embassy, ​​and the President of Serbia, Tomislav Nikolic, previously paid an official visit to our country in 2013. We expect our President to come again in November. On that occasion, we will hold a Mixed State Committee with eight ministers from each side, when we will review all relations and consider further development of the partnership.

Today, we also have several twinned Serbian and Palestinian cities which are developing cooperation. There is our diaspora in Serbia with about 200 Palestinians who live and work and who are now Serbian citizens. Our embassy encourages them to always be among the first to help the local population, as was the case during the COVID – 19 pandemic.

Serbia has been on the rise in the last 15 years, and thus the possibilities for cooperation are growing. For now, we are recording very good economic relations.

As far as trade is concerned, there is room for improvement because Serbia is a large agricultural producer. On the other hand, Palestine does not have land which is suitable for agricultural production and we see immense potential in this segment. I am trying to convince my Arab friends to import as many agricultural products from Serbia as possible, because the land and water are not contaminated. We are also trying to focus on IT. Palestine has great achievements in this sector, and so does Serbia, and together we can do a lot.

Also, we encourage all our Arab brothers to come here to work and the result of our joint efforts are the investments you see – Belgrade Waterfront, investments in agriculture in Vojvodina, etc.

How does the Palestinian embassy promote the culture and tradition of Palestine in Serbia?

We regularly organize different activities. Last year, we marked the Day of Friendship between Serbia and Palestine at the Vuk Karadzic Cultural Institute in Belgrade. We also marked the Journey of Saint Sava to Palestine in the St. Sava Temple. We are the first and for now the only embassy that has received permission to organize a celebration in the Temple. Both events were attended by a number of participants.

I would like to add that about 50 Palestinian students are currently studying in Serbia, who also often organize their activities. Our scholars mainly specialize in the fields of medicine, engineering, and economics, not only in Belgrade but also in Nis and Kragujevac. Serbian universities are highly esteemed in Palestine.

At the level of the everyday life culture, what are the customs in Palestine, and what are they like in Serbia when it comes to hospitality? What is the difference between national specialties?

Just like in Serbia, when you come to a Palestinian family, coffee, water and something sweet is served. When it comes to food, there are similarities and differences. Our cuisine is based on vegetables and cereals, legumes, and wheat products. Broken and cooked wheat is often prepared as a soup, which is known in Algeria and Morocco as harira. Palestinians use chicken more than red meat, as well as olive oil. The cuisine is Mediterranean. The more famous dishes we often use are falafel and hummus.

It is interesting that sarma is a dish made by both peoples – in our country it is prepared with fresh cabbage, and in Serbia with sauerkraut. Stuffed peppers are made in both Serbia and Palestine.

Several excellent restaurants offer Arabic specialties in Belgrade. I am glad that the city has thus acquired a gastronomic international character and become richer in this regard.

You are fluent in Serbian. How hard was it for you to learn it?

It was not difficult for me to learn Serbian because I think you cannot understand into the essence of mentality if you do not speak the language of one nation. That is why, when I came here, I first started learning the language and history of the Serbian people and reading Selimovic, Andric, Cosic … I wanted to understand how Serbs think. I consider myself a friend of this country. Everything what I wish for my country, I also wish for Serbia.

How do you feel in Belgrade today?

Living somewhere for 15 years seems like a century. I feel Belgrade as my city. I followed how it has been changing and I am glad that it is developing into an important and modern hub.

How would you describe your cooperation with Dipos?

The embassy has been cooperating with Dipos for more than 40 years. Before the new building of the Palestinian embassy was opened, we used the facilities managed by Dipos. Today, thanks to the organizational skills and fantastic work of Mr. Krivokapic, the Diplomatic Colony in which we are located has become a paradise in the very center of the city. It is one of the safest places to live. When I walk around, I hear birds, the voices of children, there is greenery everywhere. This is truly one of the most beautiful places in Belgrade. 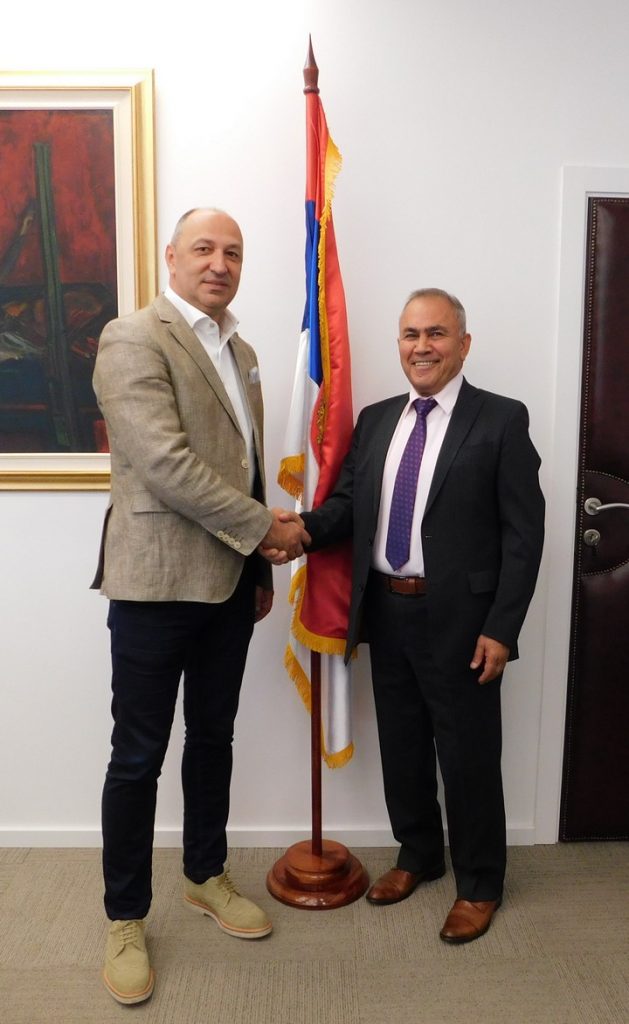 Director of the property management and rental company Dipos Belgrade, Mr. Djoko Krivokapic (left) and H.E. Mohammed Nabhan, Ambassador of the State of Palestine in the Republic of Serbia (right)