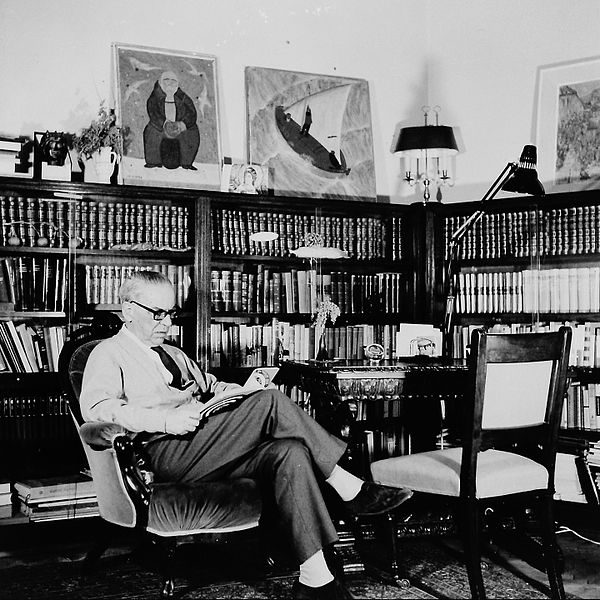 “It is not only that diplomacy is not for everyone, but it can be freely said that there is a small number of people who really have the gift and the vocation for the job. These are people of good but simple mind, people of simplistic and limited sensitivity and cold hearts, but not completely devoid of heart and without any sensitivity, capable of pretending but not closed and mysterious, even less vile, strong but not rude, fast and determined, but not hasty and harsh, real, sober, but also dry and boring“, wrote once Ivo Andrić in his notebook on diplomats.

He was born on October 9, 1892, in Dolac near Travnik. After the death of his father Antun, his mother Katarina sent the two-year-old Ivo to Visegrad to her sister. Watching the winding pillars on the Drina Bridge every day, Andrić finished primary school in the town which would further mark his work.

Bridge on the Drina 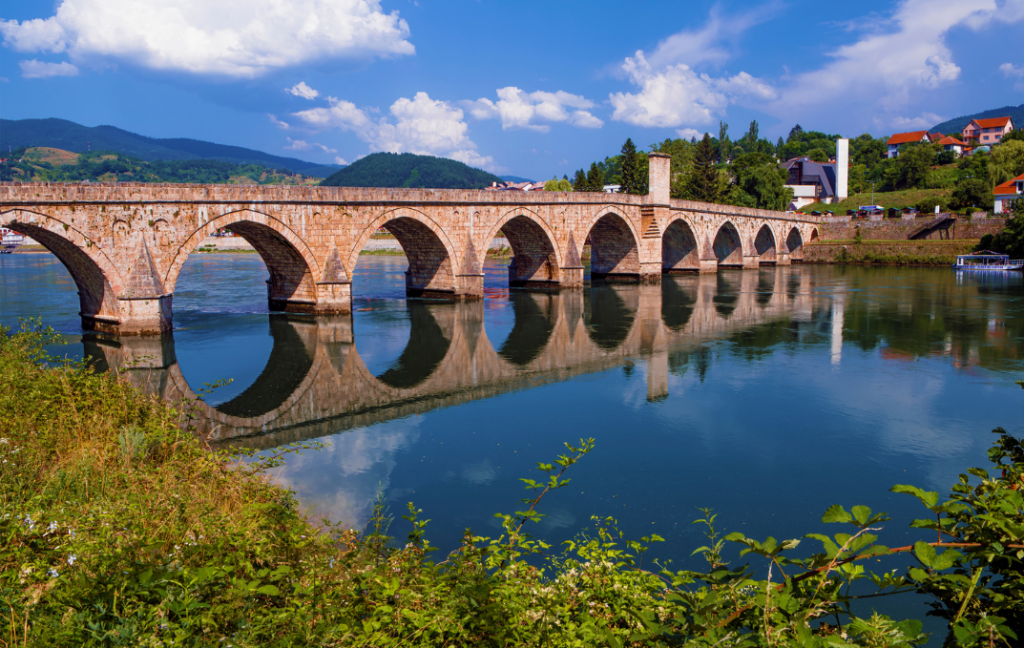 As a high school student, Ivo became an ardent supporter of the idea of Yugoslavia and an energetic fighter for the liberation of the South Slavic peoples from the Austro-Hungarian monarchy. The attitudes he took in his early youth largely determined his further literary and diplomatic career.

After the imprisonment for his activism in the Young Bosnia organization, Andrić went to Zagreb he heard the news of the unification of the South Slavs into the Kingdom of Serbs, Croats and Slovenes. However, illness and an existential crisis made him move to Belgrade, where he began working as an official in the Ministry of Religion in early October 1919.

Andrić was active in the diplomatic service of the Kingdom of Yugoslavia from 1920 to 1941. He served in eight countries and ten cities: Vatican, Bucharest, Trieste, Graz, Marseille, Paris, Madrid, Brussels, Geneva and Berlin. 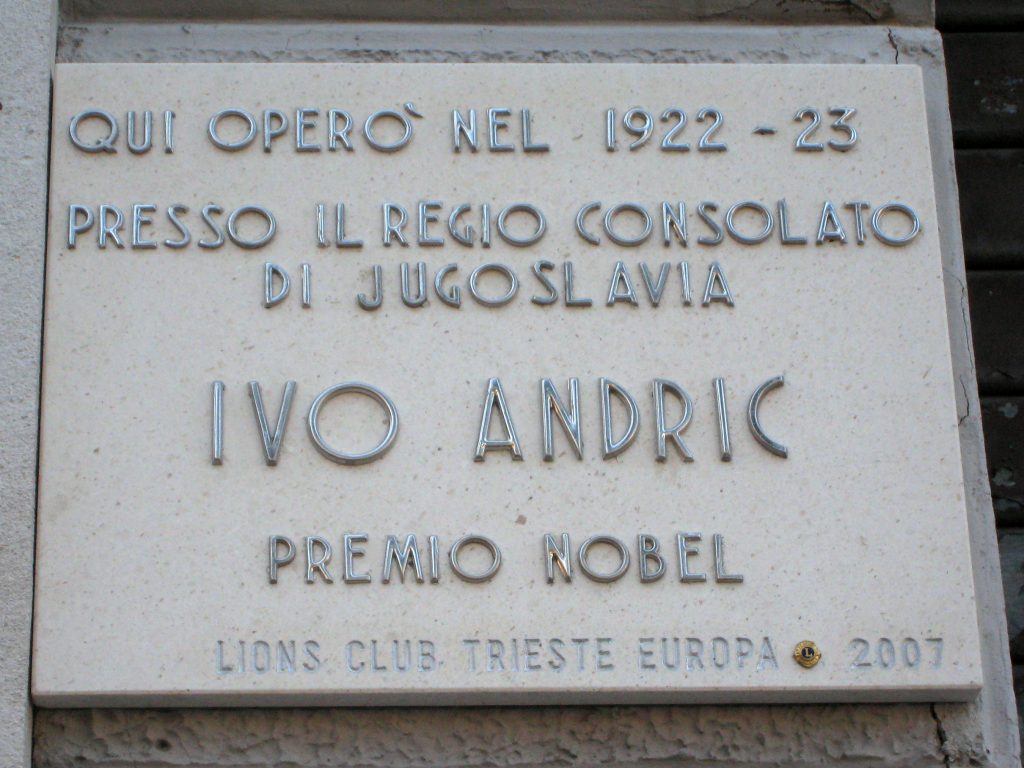 Andrić had a very successful diplomatic career: first he was appointed a clerk in the Vatican embassy, ​​and then he worked as a diplomat in the consulates in Bucharest, Trieste and Graz, where in June 1924 he presented his doctoral thesis “Development of spiritual life in Bosnia under the influence of Turkish rule”.

In 1927, he worked in the consulates in Marseille and Paris, and the following year in the embassy in Madrid. From 1930 to 1933, he was the secretary of the permanent delegation of the Kingdom of Yugoslavia to the League of Nations in Geneva. He had the opportunity to get acquainted with the general European and world issues and problems discussed in Geneva, which contributed to his better understanding of the international position of the Kingdom of Yugoslavia in the circumstances. It was noted that Andrić had a developed sense of the dignity of the people and the state he represented, and that he returned with indignation an insulting document for the Serbian people to the Secretary General of the League of Nations, Eric Drummond.

In Berlin of the Third Reich

In 1939, he was appointed Minister Plenipotentiary and Ambassador Extraordinary of the Kingdom of Yugoslavia in Berlin. This service of almost two full years proved to be the most delicate period of his diplomatic career. He himself stated that those years were the most painful in his life and he left verses from this period:

Down here, where I write these words

Rest has no watchful eye

I live constrained and I have difficulty breathing

On one hand, he was in the centre from where the destruction of Europe and the fire of the Second World War were conducted. On the other, secret contacts and negotiations between Berlin and Belgrade regarding Yugoslavia’s accession to the Triple Alliance were held without his participation as the official representative of the state. This affected him very much, so at one point he asked Minister of Foreign Affairs to withdraw him from Berlin. Andrić was informed on March 24, 1941 that the Government of the Kingdom of Yugoslavia had made the decision to join the Triple Alliance. He was invited to Vienna, where he attended the signing ceremony of a document in the preparation of which he did not take any part.

The day after the bombing of Belgrade, on April 7, Andrić left Berlin and arrived in Belgrade. This was the end of his diplomatic mission and, as it soon turned out, his diplomatic career. He spent the Second World War in Belgrade in isolation, in which he wrote the novels “Travnik Chronicle” and “The Brigde on the Drina”.

Andrić received the Nobel Prize for Literature in 1961 for his epic power with which he found themes and depicted human destinies from the history of his country. He expressed his gratitude for this recognition in his speech “On Story and Storytelling”, in which he states:

“After all, do we not face similar phenomena and the same problems in the past as in the present? To be a man, born without his will and without his knowledge, thrown into the ocean of existence. To have to swim. To exist. To carry an identity. To withstand the atmospheric pressure of everything around us, all the collisions, unpredictable and unforeseen actions of one’s own and others, which are usually not to the best of our ability. And above all, to still have to endure one`s own thought about all this. In short: to be a man.”

On the news of winning the Nobel Prize, Andrić in his home, in 1961 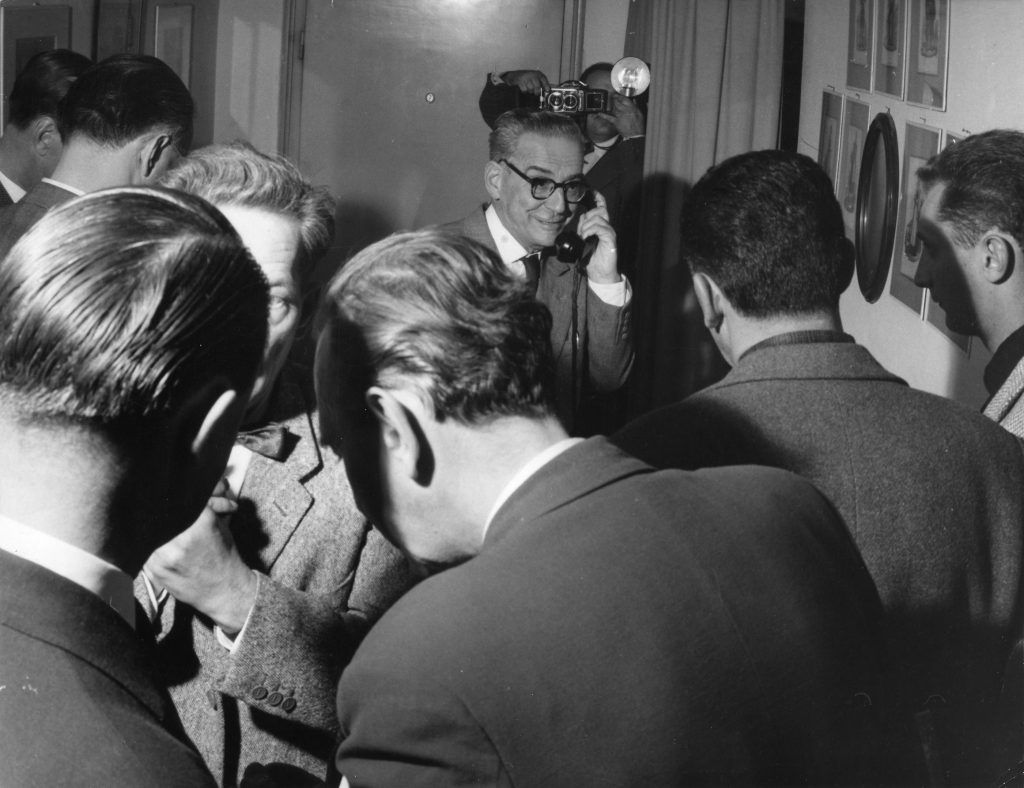 Ivo Andrić donated the entire amount of Nobel prize fund to the Library of Bosnia and Herzegovina.